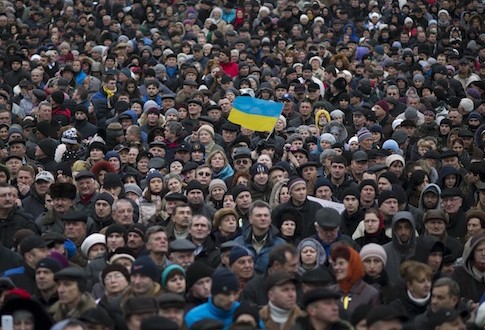 Ukraine: Don’t give in. Resist the lies.

Russian journalists, publishers, theatre artists, scientists and other intellectuals have formed an action alliance against the current Russian policy against the Ukraine. On 19 March in Moscow the alliance organized a congress “Against war. Against Russia’s self- isolation. Against restoration of totalitarianism.” The Russian PEN centre has collected more than 4.000 supporters of the following statement, published by Novaya Gazata on 13 March (English translation Irina Bondas):

Don’t give in. Resist the lies.
Anti-war statement by Russian intellectuals

Not for the first time in Russian history are people who oppose the state’s aggressive imperialistic politics being denounced as defeatists and enemies of the people. Not for the first time is devoted subservience valued more than civic engagement. The events in the Crimea are rapidly unfolding and will end, if not in bloodshed, then at least in disgrace for Russia and catastrophe for two countries. The hope that these developments can be stopped with reasonable arguments is dwindling day by day. It is therefore all the more shameful to stay silent and stand aside passively now. We do not claim to be ‘important figures’ in culture or academia, but simply as Russian intellectuals working in many different areas, we state:

We are against the invasion of another state’s territory.
We are against war with the Ukraine and hostility towards the global community.
We stand in solidarity with everyone who is not giving in and is resisting the lies.